There’s a common misconception that in order to really pack on the muscle, you need to go on a bulking cycle where you eat a target number of calories each day and don’t worry too much about the source or quality of those calories. Similarly, many people believe that you cannot lose body fat while trying to build muscle at the same time. Both of these perspectives are flawed.

So before we delve into why everybody wants to be ripped and how to bulk and cut at the same time, we’re going to look a couple of key questions people ask when contemplating bulking and cutting.

Nothing I write here is intended to body-shame. In fact, in the next section you’ll learn why I’d rather people pursue health than a specific look.

Contents hide
1 Why Are Abs So Attractive?
1.1 Before You Starve Yourself For That Flat Stomach
1.2 Why Is My Lower Belly So Big?
2 Why Do You Look Bigger When You Cut?
3 How Do I Keep My Face From Getting Fat While Bulking?
4 Here’s how You Bulk and Cut at the Same Time (4 Hacks)
4.1 Myostatin Reduction
4.2 Creatine
4.3 Intermittent Fasting
4.4 Fermented foods
5 Yes, You Can Bulk and Cut at the Same Time!

Why Are Abs So Attractive? 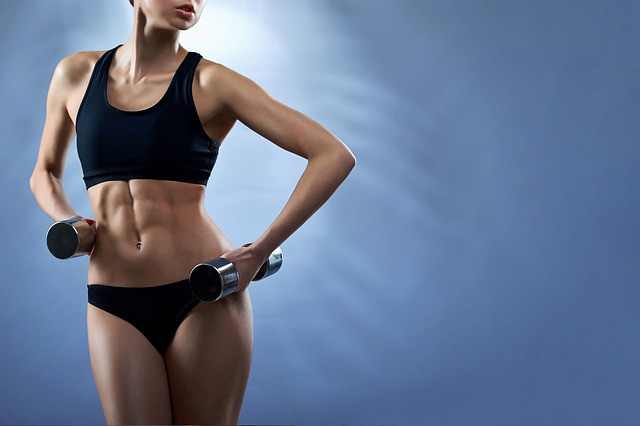 Let’s face it, most people are motivated to lose weight because they want to feel more attractive – either to their spouse or partner, or because they are single and want to attract admiring glances.

Signup for news and special offers!

But what exactly is it about a cut physique that makes them so attractive?

A six-pack always impresses, but is there any science to support what we know instinctively – that abs are an attractive feature?

Well there is a study from 2005 which found that for men, there is an optimal waist to hip ratio of 0.8 and that deviations away from this ratio reduce male body attractiveness.

That comes as no shock really does it? Beer bellies simply aren’t all that attractive!

And what about women? Does a six-pack on a woman increase how attractive they are? This 2008 study looking at abdominal depth and waist circumference as determinants of female attractiveness suggests so.

The analysis revealed that:

the depth of the lower torso at the umbilicus, or abdominal depth, and waist circumference were the strongest predictors of attractiveness, stronger than either BMI [Body Mass Index] or WHR [Waist to Hip Ratio].

Obviously, if you have a six-pack, the depth of your lower torso is going to be as slim as possible because, not only would your body fat percentage be sub 10%, but your abdominal and core muscles will be sufficiently toned to shape your lower torso.

The study goes on to say:

Women with shallow abdominal depth and small waist circumference are more likely to be healthy and non pregnant, suggesting that this may be an adaptive male preference that has been shaped by natural selection.

This certainly makes sense from an evolutionary point of view.

Before You Starve Yourself For That Flat Stomach

However, I just want to plead with you, whether male or female, not to obsess about your body fat levels or waist depth and circumference.

Sometimes, no amount of dieting or exercise will achieve that perfectly fat stomach. I say this because of the experience of my wife.

She was in great shape – running and kettlebell workouts kept her lean and strong, yet she was always unhappy with her belly pooch.

She just put it down to having carried our son in there for 9 months, but over a decade later and after countless workouts, she was disappointed that she didn’t have a completely flat belly.

Why Is My Lower Belly So Big?

She was injured at work which led to her requiring an MRI scan and then lots of unpleasant diagnostic procedures, which revealed among other things, that she had a ‘long tortuous colon’.

This is where the colon is longer than it needs to be and coiled around to fit into the belly. It’s sometimes called a redundant colon.

As you can imagine, no amount of dieting can shorten the bowel!

To me, she’s prefect and I wouldn’t have her any other way and the last thing I would want, is for her to think that she’s not attractive just because she has a belly pooch. Nothing could be further from the truth.

So as you read through this article, I hope you’ll take away from it what you need to optimize your physique and be the best version of yourself, but please don’t get too hung up on sculpting a super-hero physique.

If you’re prone to bloating and find that you have a stubborn belly pooch, then just remember it could be because you have long tortuous colon and there’s no amount of dieting that will change it.

With that said, if you’re somebody who does suffer from bloating, make sure you read on until the end of the article, because I’ll share some interesting tips that may be key to getting rid of the bloat once and for all.

Why Do You Look Bigger When You Cut?

Just look at any bodybuilding competition – the contestants look truly huge – at their very biggest and yet they’ll be SIGNIFICANTLY lighter than they were during their off-season.

The truth is, when fat is stripped away from a physique, the underlying musculature shows through creating dramatic curvatures and visible striations.

Additionally, when people lose body fat during a cut their proportions change. 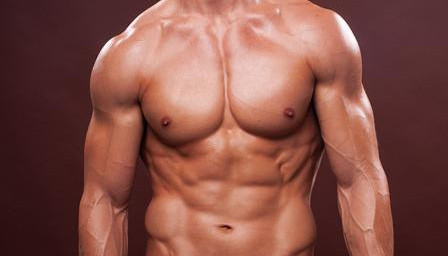 Their waist gets narrower than subcutaneous fat reduces, meaning that the underlying muscles look more pronounced and the whole physique looks more dramatic and impressive.

Bulking and cutting at the same time offers you the best of both worlds so that not only do you continue to grow bigger muscles while reducing body fat, but you enhance their appearance by reducing your overall body fat percentage.

How Do I Keep My Face From Getting Fat While Bulking?

Again, this comes down to they type of bulking regime you’re going to follow.

If you’re completely wedded to the notion of slurping high calorie “mass building” shakes that are loaded with maltodextrin or other high GI carbs in order to build your physique, then you’re going to have to accept that your new physique is more than likely going to be a flabby one!

A bulking program that is heavy on sugars and high-GI carbs will inevitably lead to an increase in your body fat percentage.

And some of the increase in your fat stores will settle around your face and neck.

A bloated face isn’t generally a good look and so you if this is something you’re trying to avoid, then you really need to be careful about the carbohydrates you consume.

Making good dietary choices will make all the difference in terms of the results you get from your bulking cycle.

But here’s a list of some of the worst culprits for foods that will lead to a puffy physique, love-handles and worst of all, a fat face:

So now we’re going to look at 4 incredible hacks to make cutting while bulking a sinch, so be sure not to skip to the end of the article!

If you’ve never heard of myostatin, it’s a protein that restrains muscle growth, so that they don’t grow too large. I know what you’re thinking – how do I reduce or block mysostatin so that I can grow unfeasibly large muscles?!

Well you’re in luck, because w while ago I wrote a guide on how to inhibit myostatin for dramatic gains is muscle.

You definitely need to check that out, because not only do lower levels of myostatin promote muscle growth, but mysostatin inhibition also leads to “suppression of fat accumulation and of abnormal glucose metabolism”.

So implementing a strategy to reduce your mysostatin levels needs to be a key priority in your quest to bulk and cut at the same time.

Wait a minute – doesn’t creatine cause bloating and a puffy physique due to water retention?

Maybe. But don’t dismiss it.

In a recent article looking at whether creatine causes headaches I set out some startling benefits of supplementing with creatine.

In addition to all those benefits, it’s also a known suppressor of myostatin which, if you;ve read the article I linked to above, is definitely something you need to be pursuing.

Creatine is cheap, safe and readily available – so it’s worth trying even if ultimately you decide it’s not for you.

Intermittent Fasting has been all the rage in recent years – and for good reason.

The science is clear and unanimously supportive of intermittent fasting due to a plethora of different health benefits that are derived from fasting.

For instance, a study published in The New England Journal of Medicine summarizes the benefits of intermittent fasting as:

Sounds great doesn’t it? And while it requires a degree of lifestyle readjustment and self-discipline, it’s well worth making the change for the considerable health benefits that fasting offers – which are as far-reaching as tumor suppression!

And let’s face it, compressing your meal consumption into a 6-hour window may be challenging, it’s a whole lot easier than tracking macros and spending half you life forensically planning your meals!

This is a personal favourite mine as I’m a huge sauerkraut fan.

This study from 2021 looked at the effect of fermented foods on mice that were obese as a result of being over-fed.

This is huge. Not only did the fermented foods have a massive impact on reducing body fat stores, but glucose tolerance was improved too!

I appreciate that humans aren’t mice, but even so, don’t you think it may be worth investing in a few kilner jars and getting started on your own sauerkraut production line?

For years, I have used these sauerkraut jars which are affordable and practical. I’ve not had any issues with mold either!!

Well check out this study which considered the effects of yogurt on gut health and obesity.

It concludes that “evidence suggests that yogurt consumption might also improve the health of obese individuals.”

Aside from the direct effects on body fat levels, fermented foods are incredibly good for you and so I hope that you choose to incorporate them into your daily diet.

Yes, You Can Bulk and Cut at the Same Time!

Is this the end of the article?!

Where are the workout routines featuring hours of cardio or near-death-inducing HIIT sessions?

Yes, their absence is conspicuous isn’t it?

The truth is that if you’re hitting the weights at least 3 times a week, having regular walks (early morning fasted walks if possible) and eating like a beast during your 6 hour eating window, then providing that you apply the hacks listed above, your body won’t be able to do anything other than build muscle and torch body fat.

So give these hacks a try and let me know in the comments how you are getting on in your crusade to cut while bulking!

Until the next time.